Her books have been praised in The Wall Street Journal, Kirkus, Booklist, School Library Journal, and other publications and have been selected for several “best of” lists for children’s literature.

Before she began writing for children, she was an award-winning reporter for Minnesota Public Radio. A long-time contributor to National Public Radio, she also reported from Mexico and South America for the independent production company Round Earth Media.

As well as writing books for kids, she also makes occasional appearances in the guise of a travelling alchemist.  Most recently, she was honored to be invited to the amazing Gravity Fields Festival, a celebration of the life of Isaac Newton held every two years in Grantham, England.

She’s now at work on a new book of narrative nonfiction, the story of a thwarted girl genius, Charlotte Bronte, who invents a magic world and documents it in tiny, secret books too small for grownup eyes.  More to come!! 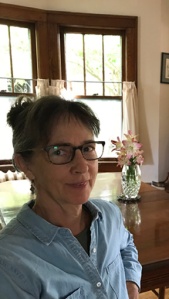